We started our tour on Friday 16 March, taking the train to Kobe in the evening. We went to Shikoku the next morning, Awajishima, to the island of Kyushu, then to the Kansai area and Ise. 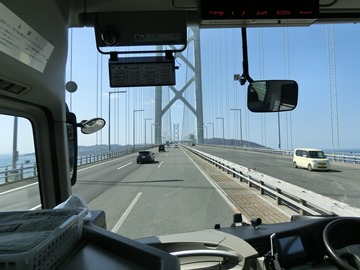 Here is our bus to Tokushima from Sannomiya in Kobe, crossing the Akasi strait bridge towards Awajishima.

We did two workshops before the concert, one of French language through Role-Play, which Bix did with stylist Justine, and Marki with the help of Bix a music-chanson workshop. We then played the concert, and finally there was wine tasting. Thank you to Benjamin and the Committee of the Alliance for organizing! Around 9 pm, Marki got a phone call from a friend in Tokyo who had found that the French friend staying at our house had become very sick. She went with her to the doctor’s and she took care of her, thank you Yoshie san! We were very worried the first days of the tour.

The coffee-shop Lare near our house in Tokyo had introduced us to the couple who manages the Somanote place in Awajishima, a social meeting point for culture, natural and stressless lifestyle and information about organic products. There were many children and people who had moved away from Fukushima or from big cities to search for a more natural way of living. Here we were on the tatami, playing without amplification. Fantastic place.

People from various countries who live in Takamatsu often meet at Palms on Monday evening to talk and exchange. We played for them. Everyone was very kind, calm and warmhearted. They listened carefully to our music. Some wanted to take up music again, after hearing us, they said. We hope they do! After the concert some non-Japanese went to Bix and talked about life in Japan, relationships to Japanese, love and ideals. They opened up their hearts. The ones who went to Marki spoke about the guitar, the music and harmonies.

Mysterious space, beautifully decorated by Kuu chan, the artist who lives there. Some people had come from far away to see us. A young politician, Hidaka Yuuske, from the communist party, came to see us and asked us to come back next year. He is working to make Shikoku Chuo Shi alive again.

The owner organized the evening, asking the same groups as last year to play as guests. Happy atmosphere! After the concert, he showed us photographs from when he was studying patisserie in France 20 years ago. It was touching and nostalgic. 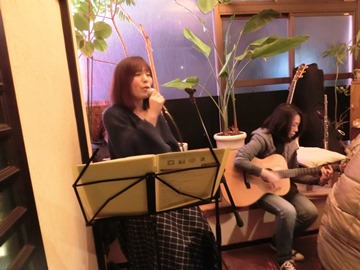 The group of deux filles "Bekka" played with us this year again! 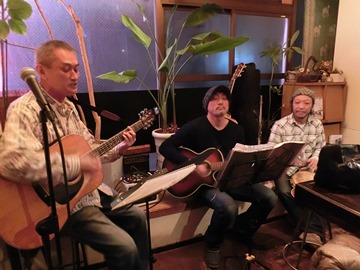 We played three tunes together with saxophonist Tatsuya Tamai that we met in Kanade last year: Au Calin, Souvenir d’Après-demain and Esprit Plastique. It was very nice. Marki had sent him the scores before leaving Tokyo. Both his fans and our Uchiko fans came. The cherry blossoms had started to bloom, earlier than usual. The weather was getting warm. 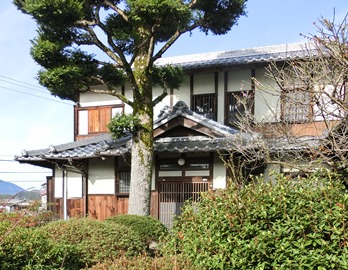 We took a boat next morning from Yawatahama, Ehime, Shikoku to Usuki, Ooita, Kyusyu. 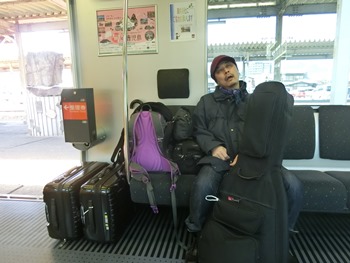 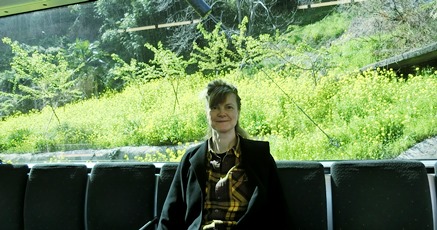 There are beautiful rape flowers behind Bix sitting in the train (the window is big).

The owner’s sister had heard our music in the Lare coffee shop in Tokyo and had invited us to play when we come to Oita. We hadn’t been able to play last year because of a fire there, but Wam Am Café had been renovated. There were few people but it was very nice, because they appreciated our music. Wam Am Café is building itself up through music and that is so good !

Chiho san who runs the place with her husband Shingo is also a wonderful contemporary dancer. We knew her from the time she was dancing with H. Durning in Kyoto, 25 years ago! Now she is back in her hometown and has started this restaurant. We are the guests of the yearly Art Night, and feel very much taken care of by them and their dancer students and waitresses. One lady in the audience told us that listening to us opened up something in her and that from now on, she would like to listen more carefully to her son playing the guitar (she said she had never understood his playing before). She also said she would like to try to learn to play an instrument. Fantastic. 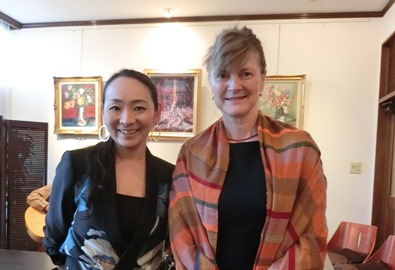 Chiho&Bix, meeting for the first time in 25 years.

This time the event had a theme and it was about Belgium. In between the songs, we talked about the influence Belgium had had on our music and introduced the country itself. The audience tasted Belgian beer, cheese, waffles etc. Bix was sick, and had partly lost her voice, but it went fine. Before the event, she gave a French lesson to 5 people. The owner Mr. Oozono always has good ideas, linking the live music and the food and drinks with the theme of the evening

On the 26th in the afternoon, Bix taught French at Café Brassens and Marki taught the guitar. This was the first evening off since the beginning of the tour. On the 27th, we were taken care of by sweet Mr.and Ms.Sonoda. They are patrons of the arts in Saga! Many people came, some new and some we had seen before. Bix had still a hard time with cough and sore throat, but she was getting better. There was a big surprise: Kanayo san, a friend from Tokyo who had just moved to Fukuoka, came from Hakata to the concert !

Our friend Kanayo san came to see us at the Kuroneko too, this time with her husband Kouichi. Kuronekoya has a certain Kyoto style, maybe the owner being originally from Kyoto, and the concert was very calm and intense. The music brought certain concentration in the audience amidst all the sculptures and pictures of black cats. 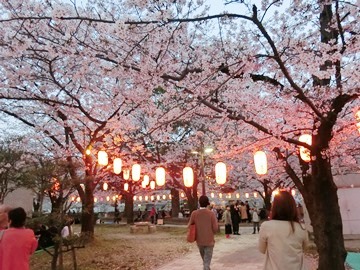 We went out for "Hanami" to a park at the city center in Hakata and tasted some honey beer and coffee beer! Beautiful cherry blossoms. Bix was getting better. Marki too (he had a cough too)

Oomuta used to be a big mining city where activities were mostly directed by the Mitsui company. After they stopped 20 years ago, people moved away. We felt again this beautiful creative energy that is reviving the city. Miho san and Kuniko san organized a concert for toddlers – the Happy Mama Project. To have children play and listen to live music is such a good thing, we think too. The small children listened to us while playing.

We played in a senior residence where we also made people touch and try to play the instruments. The nurses said they had never had a live concert there and that they would like to have more from now on. Music stimulates the brain and the body.

On the same day we did a Bix&Marki dinner show at Daifuku, a famous, big and old cake shop and restaurant in Oomuta. The owner Kumiko san had invited people who were related to the business. The room we played in had not been used for years. Music makes energy flow and links people together. It was marvelous.

We had been invited by Kuu chan from the Kuu Shokudo where we played on the 20th of March to come and play at her painting exhibition in Kyoto in the beginning of April. So we went there and found an interesting café-gallery like a hut on the islands. Kuu’s and her friend Haibi’s works were great, full of feelings of freedom and nature. 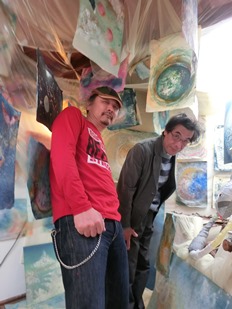 Giovanni Piazza and Rie Asakawa are actors and singers, friends from long time ago. Bix and sometimes Marki used to play with them many years ago, in an Italian Folk music group. Now they have a program on this Inuyama radio every Tuesday at noon. Our music was played, Rie read the lyrics of the song ‘Un soir d’été’ (a Summer night) in Japanese. Bix and Giovanni discussed about languages. We were very happy to share our music and ideas on air too !!

Beside the Inuyama castle, there is an area in which still remains the old time atmosphere.

Hisai, a friend in Tokyo, had introduced us to the chef of this restaurant. He told us that he had at first worried about how the evening would be with live music, because he had never tried it before, but that he was sooo happy to have discovered that wine degustation, dinner and music went well together and gave each other even something more... The audience was so nice and lively! We heard that there are not many places with live music in Ise.

When Bix was living in Kyoto in the 90s, she went almost every week to borrow books at the library of the French Institute. She never thought at the time that she would one day sing and play songs in the concert hall and also give workshops... She did a French course before the concert and the concert went very well. In the garden, cherry blossoms and warm weather...

This time we felt that playing an instrument in front of an audience seems to give motivation to some to start to learn to play one ! Many people told us this in this tour... Otherwise it was intense and physically harder than the other ones, probably because the weather conditions were unstable the first week of the tour, there were more and more CDs to carry and... carrying the luggage in trains was not easy as we were not in good shape. This was actually the first tour that Bix got sick and had to manage breathing, energy and loss of voice to the tunes she could sing... a very good experience indeed. To be a musician is to move around, play for various people in various places, and definitely to manage one’s own health and body. We felt that we got very good contact with people at most places, maybe also because we start to come every year to some of them. Thank you to you all!