We left Tokyo on Thursday the 20th of July and went north to the city of Hakodate. From there, we went to Tohoku and then to our final destination Izumo in Shimane. We came back to Tokyo on the 13th of August. When we started the tour it was supposed to be the end of the rainy season...

A very nice little bar in the centre of Hakodate. Pamela, the only French long time resident in the city, had organized this event for us. We met music lovers and were full of energy.

In the afternoon we played for the residents of the Asahigaoka senior residence, outside the city. The founder of this residence, the French priest Philippe Gourraud, had the idea that everyone needs to express himself, paint, sing and feel, through art works and music. We were introduced to the residence by Mr.Wakayama, who took over the management of the Japanese-French Association of Hakodate after Mr. Gourraud passed away. It was a very moving concert.

We were on the stage of the same beautiful room as every year. Old paintings on the walls, wooden floor: the sound and the atmosphere are very special. We have started to come and play in Hakodate every Summer and we get to know the place better, learning more and more about it.

It had been raining and raining and we heard in the morning that there had been landslides on the train rails between Sapporo and Hakodate. Our next stop was Hirosaki in the south. We fortunately arrived without delays to Kimori. Students from Hirosaki university helped us to set up the concert. Ms.Kumano had organized this event as a combination of our songs and talk about cultures in Europe, at this local cider maker located in the middle of a beautiful orchard.

The rain continued to fall. There were floods on the railway between Hirosaki and Akita… We took the train half-way and all the passengers managed to get on a local bus to Akita. Arriving just on time to the bar we found a warm-hearted owner and customers. The bar was created by Yuki who had spent seven years working in the States. He decided to come back to Akita and take care of his love for motorbikes and music…We also played jazz tunes with wonderful singer Mirin and sax player Yuki whom we both got to know.

We had played here last year, and this time too there were other groups performing the same evening. Marki played with our longtime friend, painter and violinist, Makoto Kobayashi, Makoto's beautiful compositions. It was so nice to be both a player and a listener, enjoying good music. 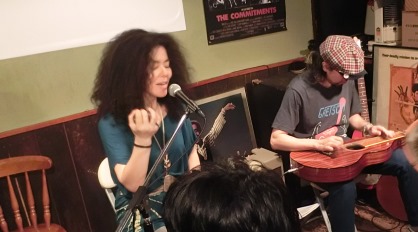 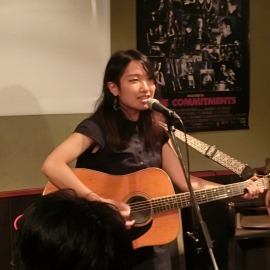 Maruyama san, president of the Norway-Niigata Association, had organized this concert for us in a beautiful newly constructed terrasse-café in the city of Sanjo. In between our songs and after the concert, Bix talked about Norway and answered questions about Scandinavia. We also heard about how the Association started 20 years ago, through the meeting between flower designers from Japan and Norway.
A fantastic evening.

When we contacted Ms.Sugiura of the Nagano French-Japanese Association, she suggested right away to make a lunch-concert for the members of the Association. Without knowing anyone and coming for the first time to Nagano city, we were very happy to meet all these wonderful people. Most of them spoke good French and all of them were very friendly. We enjoyed playing in this interesting old-style café where the staff happened to be musicians!


The beautiful scenery from “Obasute” station
on the way to Matsumoto. 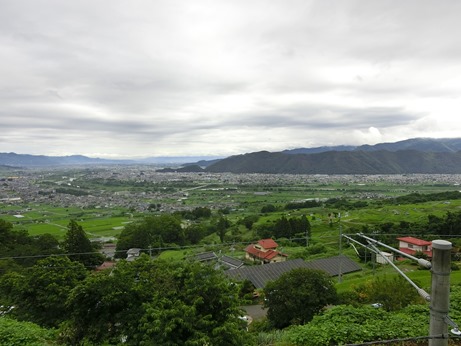 We met singer-song writer Arthur Fowler from Tokyo whom we had invited to come and join us at some place during our tour. He decided to come with his wife Shigeko to Azumino and Matsumoto. On the same train was Marina, who came all the way from Nagoya to see us. L'Atelier des sens is in the middle of fields and is very spacious, with a round ceiling on one side, which makes a good sound. Marki and Arthur played their guitars together at first, then Arthur and we played in turn after...that was great.

When we arrived, Mikiko and her husband were there. What a surprise! They live in Tokyo but have a chalet in the mountains in Tateshina. Arthur Fowler and Shigeko were there too. We had a nice evening playing alternatively with Arthur, as well as Arthur and Marki as a guitar duo. Thank you to Au Crieur that always welcomes us !

The next morning, we walked 30min from a train station to see illustrator Chihiro Iwasaki's museum outside the city. 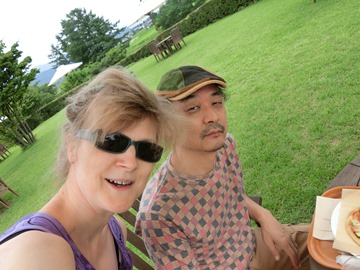 We had lunch at a café in the museum.
Chihiro was drawing pictures of children, sending out a message to save children in the world, to protect their freedom and peace. We could see the path she had taken and were thinking of paths one can choose to follow in one's life.

In Trois there is so much creativity, in the food and wine, photos, posters and collages on the walls. An ex-student of Arthur's from Tokyo who had moved to Matsumoto came to our concert. This was the last of 3 concerts with Arthur and we enjoyed a lot his tender voice and soft sequence of harmonies. Trois was a great setting for our music!

Hiramipan is a very calm and beautiful bakery, coffee shop and restaurant. It has a newly opened gallery up the road. A designer in Tokyo, who is also an ukulele student of Marki's, had an exhibition there, her name is Seory. The exhibition was very sweet. The gallery too. M. Hirami would like to open a new shop next to these two, to concentrate on bread on one side, the restaurant on the other : We get to know the projects and ideas of others, which again nourishes our ideas.

The secretary of the French-Japanese Association of Fukui, Mr.Tsubota, had organized our concert and we played for a nice wine-tasting group, combining French cuisine and wine with music and talk. In the daytime, Mr.Tsubota kindly drove us around to visit Fukui.
We went to the Eiheiji temple where Marki had been on a Zazen retreat when he was 13 years old... Walking around in the temple we imagined him as a young boy sitting and meditating for hours, cleaning the floors and following the hard rules... He was already seeking about life at that time... the same he does through the music now.

We met again our Nagoya friends, among them friends from the time we lived in Belgium. It was raining but they came ! It was a big pleasure to play for them but also to see them communicate with each other (they meet at our concerts)... Thank you from the bottom of our hearts !

Gilles Guerrin, from the French-Gifu Association Gifrance lives very near Open Sesame. We went to his house in the afternoon and played some songs with his wife Chie and son Yuya . Then we all met again in Open Sesame where our friend Ikuko came with her 3 grand-children and daughter. She had been staying at Julie's in Perpignan for 3 weeks in May. As I did in the other concerts, I introduced Julie's book to the very young audience that was there. They seemed not to be used to hear live music and to hear French ...

The owner Mr. Ooga stopped working in a company and started his own café to have more time for himself and to be able to play music. We played some standard tunes with him and with our friend CH who lives near there. The audience was lovely. There is time and space for music in nora café.

When we arrived in Kyoto, there was a typhon coming. In the evening, we went to the Pizzeria (Quentin and Ryan, father and son, friends from long time ago opened it recently). Despite the typhon that rolled over us, a lot of friends came ! Childhood friends of Marki's, of B&M when we were living in Kyoto, some we hadn't seen for 15 years ! It was wonderful. When we went out of the pizzeria, the typhon had gone.

In the daytime, Bix taught English through role-play (with her special method) at the Kyoto city Labor Gakuen, and then we went to Kobe to play. People were sitting on the terrasse and inside the big and bright bistrot. A couple celebrated its 20 year anniversary of marriage... it was a full moon day and it was still raining... but very nice.

There was a train delay because of an accident, and we spent 6 hours on the train. We were met by Mr. Morimoto who was taking care of the event, then did the sound check, and right away the concert. Café Mother's owner is very much into films, especially French cinema. The whole place was wonderfully designed like a movie setting of la nouvelle Vague. Two childhood friends of Marki's from primary school came ! One was living in Kurayoshi, the other one came from Kyoto to see the concert. They hadn't seen each other for 40 years.
A young French-speaking Japanese couple came to see us too. They had heard that Bix was teaching at Waseda University and they had both recently graduated from there. They happened to be the managers of a Japanese Ryokan in front of Izumo Taisha, the great sanctuary in Izumo. The audience was nicely dressed up, yukatas for the girls. Fanny from Tokyo (Cocotte Cuisine) had made and sent Zézettes (cookies from South France) ! While we were playing they projected the famous film directed by Claude Lelouch in the 60s,

It was the day of the Summer festival and there was, added to it, an international corner, organized by Esperança's Mr Esumi, with Brazilians, Philippinos, Coreans, people from various countries. Marki and I felt completely integrated in this multi-ethnic and multi-cultural festival. We saw Japanese folk dancers in yukata at the same time and place as this international part of the festival, and wish it could happen more in Japan. Side by side, different people living in the same country. Obrigado ! 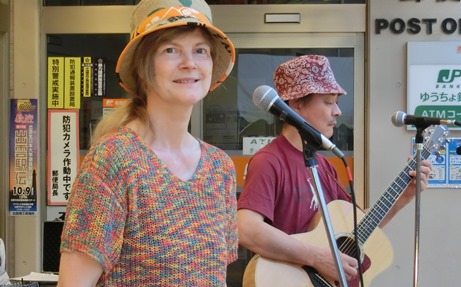 We played two stages there before and after other local groups. Lovely encounters. The rain started to fall just before our second stage but we finished it!

Bix did a beginner's French lesson and cultural exchange
the next morning, with big pleasure.

There are very few (only one?) French living in Izumo but many people are interested in knowing more about other cultures.

Then, with Mr. Esumi, we went to grab a bite at the Brazilian coffee shop MK Bar. The walls outside are painted with a lot of colors and inside is like being abroad.

They had a guitar so Marki played with the owner Mr. Kazu. 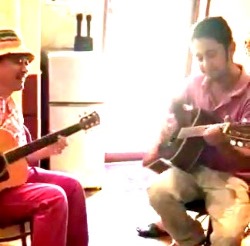 Izumo is on the way to become a model of integration of cultures in Japan. That is soooo nice.

The rain followed us almost all the time on this tour. But these 3 weeks were fantastic. At the end we were tired, but happy. We felt more than ever the importance of bringing people together and to bring new elements of different cultures through the music. Japan is opening up to other cultures, in different ways. We are like troubadours and will continue our troubadour projects... Thank you sooo much for following us.
See you next time !