This Summer tour started on July 28 in Hakodate (Hokkaido) and ended on August 14 in Takasaki (Gunma ken). It was a lovely tour, precious and fulfilling for our music and the contacts we made with people. It was the first time we went down the north-eastern coast of Japan (Akita, Turuoka in Yamagata ken, Niigata and Kanazawa). Then we continued to Kyoto, Kobe, up again to Gifu, Nagoya, Anjo, Matsumoto and Takasaki. We brought our new sixth CD called ‘ Six planètes’.

We are now coming every year to play for the French-Japanese Association and include a visit to the Foreigners' cemetery and the tomb of the French soldiers. This time we also visited a Senior Residence created by the French priest Philippe Gourraud, very special indeed because of its concept of soothing the elderly with art and happiness. The dinner-concert went well and we were amazed to hear that one of our fans had been a sailor for 30 years, that he had been everywhere around the world, and that he is 81. Thank you to you all !

This time in Hirosaki, we combined the concert with a French conversation course with students from the University of Hirosaki, and others. These students are going to organize a French event in September to promote French culture, and we ended the concert with a poetry – music – movement improvisation with them, so that they could see how to create a piece. We also showed them how to do public reading in French, with gestures. Hirosaki was great this time too !

The next morning, we went to see an old cinema from the 50s in Odate, called “Onariza”. 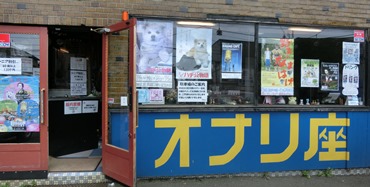 Onariza is a wonderful place with old projectors and posters, seats and popcorn machines. Supporting old cultural treasures is very important ! Thinking about what Bix&Marki can do for it. 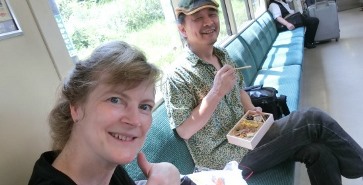 It was the first time for us to play in Akita, and we had been introduced to the famous restaurant Recette by a Japanese friend who lives in France. We played in a local chicken event, barbecue on the terrasse, a lot of people, and it was very nice and friendly. The local chicken is a local produce which is really famous as “Hinai-Jidori”. People in Akita are very quiet and we felt that they are very warmhearted. We will definitely come back ! Thank you !

A musician friend from long time ago, Makoto lives in Tsuruoka and organized the concert with other bands and local musicians playing. We were amazed by their good technique and personal touch to their music. It seemed that music goes well with the beautiful nature around. Yamagata is amazing : the sea, the fields and the mountains are very calm and peaceful. Makoto played the violin with us on a couple of tunes. A musical, hot and lovely evening. Thank you !

Makoto and Marki on a footpath in Haguro mountain. 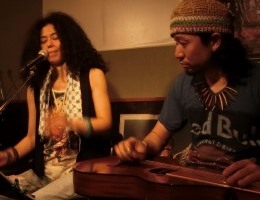 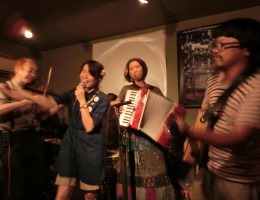 Bix was in contact with the Norway-Japan Association of Niigata. Our host was very kind and showed us around in town, before bringing us to the little house at the harbor, where shop owners from newly installed shops came to see us for the concert. They are trying to make this part of town more lively. We really want to support them. Our role as musicians, during the tour, is also to be links between cultures and to be starting energies. Thank you so much !

We had no idea about how beautiful and historic a city it was. New infrastructures welcome tourists, signs in English, information centers, museums...  The owner of Hirami Pan was very kind and told us truly about his story. It is not easy to run a café or a restaurant. A designer friend from Tokyo, originally from Kanazawa, her name is Seory, had a show of her drawings in Hirami Pan at the same time as we played there. Actually, she decided to ask the owner to do this exhibition, when she heard we were going to play there. That was also fantastic… Exchange of energies ! The evening was very nice.

A lot of French speakers come to Philippe's place. A great spot in the center of Kyoto with now a terrace with a small garden on it. The stage is waiting for musicians to play ! We felt welcome, as always. Our friend Mayumi, who always comes to our concerts, was wearing an orange yukata. Fantastic. Open hearts, open minds. Thank you all !!

The weather was hot, around 35 degrees Celsius. It was an intimate and relaxing concert. Before the concert, we spoke with the owner about his work as a CD seller (it is actually a CD shop) and about how difficult it has become in the music business. We thought a lot about business and art/music, and the connection (and lack of connection) between them. Thank you Découverte, too, for organizing it! See you again !

A childhood friend of Marki's organizes this festival every year to make various generations meet each other, reviving traditional Obon dance in this part of town. It was the 2nd time we played there, and like last year it was wonderful. Everybody danced, spoke together, sat outside and the stage was also outside.

Another friend of Marki's sang a few tunes playing his guitar, also with Marki. He had to pay himself a holiday from work to be able to come and play. That is the bad side of Japanese working life. At the end, a lot of people helped to tidy up and to put down the stage and back again the fences. That is the good side of Japanese solidarity ! It was a warmhearted evening.

The owner had repainted the whole shop in red color, the whole place being hand-made by him. A lot of people were upstairs where we played and people could hear us downstairs. The sound was great. We will come again and again ! Thank you !!

Apparently the hottest spot in Japan on this day, the temperature was reaching 40 degrees Celsius in Gifu. We took the bus and then walked among the rice fields with all our equipment. Hard sport but it was ok ! One little girl danced to our songs, it was a big pleasure !!

Outside still very hot. The big fans in the ceiling of Dufi went round and round. Our friends and people came in the evening, thank you so much to you all ! In between the pieces, we talked about the Emperor of Japan who had been on TV, and about the Olympics. The concert brought discussions about Japanese history and sports. Music brings ideas and debate too !!

When we arrived in Anjo, our friend violinist Miwako brought us to her home and served us a delicious lunch. Then we went with her to rehearse the songs (one more than we played 2 years ago with her) of our 4th CD. We played the 4 songs in the first set in Café B with Miwako.

In the second set we played our new 6 songs, two of them with a local harmonica player “Yoko-chan”. Adding other musicians and sounds to our music was great ! It gave another dimension. Thank you for a musician’s evening at B's! 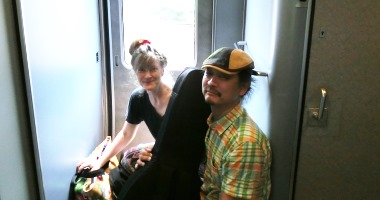 We had to sit on the floor in the corridor of the train between Nagoya and Matsumoto, for two hours, because it was the big holiday-Obon-week-end! Everyone seemed to be going up to the cooler mountains.

A couple of friends surprised us by coming all the way to the Crieur de Vin concert… Thank you so much, both of you. Thank you also to all you new people who listened to us. The atmosphere was great. The evening temperature was perfect, with the windows open and wonderful people. Thank you again !

Trois is a new bistro in the old part of Matsumoto town. Very, very new. We were bringing live music there for the first time. The home-made bread and desserts were exquisite. We had a great time ! We met wonderful people too, even … French speaking! See you next time too !

Jillco had prepared an event for us. He had made the menu relating it to us, Belgian cuisine ! We played between the dinner courses. A nice evening where we heard a lot about the city of Takasaki. 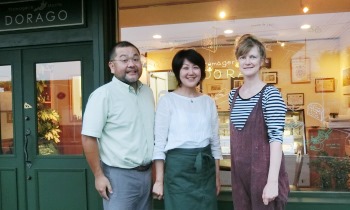 The next day we went to visit the Fromagerie Dorago in Takasaki run by a couple who had come to the concert: very good cheese indeed! Thank you !

On our last day, even if we were tired it was with high spirits that we took the bus for 30 min out of town and walked in the pear fields to the Natural Ice Cream Bar Albero. We had played there 2 years ago, on a Sunday afternoon too. Families with children drive to Albero to have an ice-cream there. We played for them. The ice-cream was delicious. This was our last concert of the tour !

This tour was probably the one where we got most contact with people. It was a hard schedule, 17 concerts during 17 days. The weather was hot and the luggage heavy. But our music got nourished by it, by the people we played for, the people we met, the places we saw, the landscapes and the things we saw.
Thank you so much for following us !