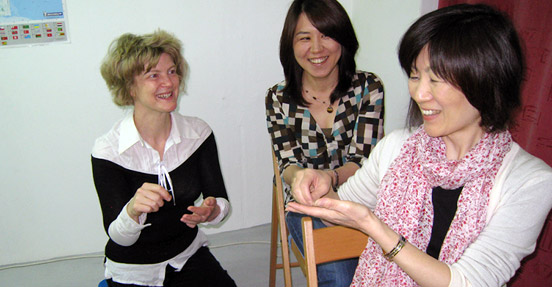 Bix grew up in Rome, Italy, and Paris, France. She then studied economics at the BI Norwegian School of Management in Oslo, art at Strykejernet, Oslo, and painting at the Art academy of Budapest, Hungary.

She came to Japan after winning an award in St Jakob im Def. Austria, to study Japanese culture and language in 1991, and lived in Kyoto for 9 years.
From 1999 to 2010, she lived in Brussels, Belgium, and took a Master's Degree in Linguistics at the University of Franche-Comté, Besancon, France, in 2008. She combines music and drama in her language teaching, especially focusing on the communicative level of the language training. She founded the Brussels Language Activities language school(BLA) in Brussels and taught there until 2010.

Bix moved back to Japan and formed ”Bix & Marki“ with Marki to develop their own original songs, inspired by European culture, an 'étrange' soundscape of soft pop jazz.
She teaches at present at the Universities of Tokyo, of Waseda, of Sensyu and at the French Institute of Tokyo.
In 2017 she published a French textbook used in the beginner French classes at the University of Tokyo : Rythmes&Communication.
As well as writing the lyrics for Bix&Marki where she sings, plays the flute and does percussions, she gives exhibitions and concerts in Japan. WEBSITE paintings : www.beatrixfife.com